I am going to repost June housing opinion from our friends at the Cromford Report in it's entirety. Very interesting information. So, why is it, when such good signs abound, are we reading so many doom and gloom stories (like this CR piece)? I believe it is for the same reason we've discussed multiple times on this blog - real estate is talked about as a national trend, whereas in reality it is a local phenomenon. Yes, I believe that the "housing market" in general has a ways to go down. No, I do not believe that Arizona will continue to decline at the pace it has been. Let's remember - we were among the first to go down (starting at the end of 2006), and are among the hardest hit (in the top five biggest pricing declines nationwide). Logically, this also means that we will reach our bottom sooner. Practically, this means that investors and savvy buyers will continue to pick up great deals for years to come, since the general mood about housing will remain dour until the other markets reach their natural correction levels, and start to level off.

Unfortunately, this is still not good news for millions of Arizona homeowners who are hopelessly upside down. I do not believe that we will see sharp and fast pricing increases, and they will remain upside down for years to come, with only solutions remaining what they are today - staying put if they can, or short selling or foreclosing if they cannot afford the house.

A child of five would understand this. Send someone to fetch a child of five.
Groucho Marx
While researching the definition of robo-signers, I came across this partial definition in Investorpedia: “robo-signers assume the paperwork to be correct and sign it automatically, like robots.” This is a perfect description of how I was at my last loan closing. I think I may be a robo-signer.
Distressed Inventory Continues Slide
The big news in Maricopa County’s housing market in May continues to be the rapidly declining distressed housing inventory. This decline is not subtle folks; it hits you over the head like a sledge hammer. We define distressed inventory as the number of homes with an active notice combined with the number of bank held properties. On January 1st of this year Maricopa County had 39,724 homes with an active notice and another 18,889 REOs.  Our distressed inventory began 2011 at 58,613 homes. At the end of May these numbers had fallen to 27,396 and 18,451 respectively, combined 45,847. In the last five months distressed inventory has fallen on average 2,553 homes per month. During the last two months these declines have continued at an accelerating pace, reducing inventory by 3,704 in April and 4,265 in May. The decline we saw in May was the highest on record indicating the snowball is gaining momentum and heading down hill. Our early June numbers are projecting the same accelerated pace. Simple math tells us that if distressed inventory continues to decline at its current rate, in 10 months it will dry up, but then, that’s merely simple math.
When I present my simple logic, readers and other experts counter with complex math factoring together a Massive Backlog of “Shadow Inventory”, "Robo-Signings", a declining demand as QE2 ends and the ever popular bank conspiracies. Sometimes, I feel like I’m conversing with Hollywood screen writers. Maybe there is a need for Rocky 7. Stallone is going to be 65, maybe it’s time he quit competitive boxing, maybe it’s time for him to leave the ring and get his real estate license.  “Yo, Adrian, we’re movin to Phoenix, two warm up bouts with ‘Robo’ and ‘Shadow’, and I think I’ll be able to take down da champ, Russell Shaw. Cut me Mick, I’m going 15.”  Boom.  Sorry, sometimes I drift.
Since January 1, 2007 Maricopa County has seen 165,385 home foreclosures, a numbing number in anybody’s book. One of the main reasons I believe we’re heading into the home stretch is how far we’ve come. The news links above talk about the same decline in distressed inventory that I just mentioned; only they attribute the decline to massive processing delays. These same articles talk about how foreclosures rose through last summer, and then began their decline in September when the robo-signings scandal broke. Information Market numbers tell a slightly different story, a short-lived Bank of America moratorium in November and December briefly lowered foreclosures. In January foreclosure numbers picked back up resuming their steady and consistent flow. In May, Maricopa County saw 4,206 homes sold at auction with 1 in 3 being purchased by investors, leaving only 2,800 reverting to the lender.  So, at the end of the day while our detractors have similar numbers, their explanation as to where we are and where we’re headed is completely different. Since January 1, 2007, Maricopa County has seen 165,385 homes removed from the “bad mortgage” file leading loan delinquencies to their inevitable decline.
I believe the decline we’re seeing in new notices runs parallel to the report of Jay Brinkman, the chief economist of the Mortgage Bankers Association, where in he states, "Of particular importance is that the drop in the percentage of loans 90 days or more past due was driven by improving numbers for loans originated between 2005 and 2007. These are the loans that drove the mortgage market collapse and now represent about 31 percent of loans outstanding but 65 percent of the loans seriously delinquent. Given that loans originated during this period are now past the point where loans normally default, and that loans originated since then generally have better credit quality, mortgage performance should continue to improve.”
The Wall Street Journal article would disagree, arguing that banks have decided to slow the foreclosure process while they perfect their procedures, in turn stabilizing property prices while minimizing losses and legal issues. There are two points in the WSJ which I have difficulty grasping. First, I find it hard to believe that the banks would foreclose on 165,000 homes in Maricopa County and just now realize they have a problem with declining home values. Second, why would you be concerned about robo-signings and legal issues when many of your current foreclosures are strategic defaults? How can there be vast legal issues when the majority of home owners facing foreclose, are saying in Henny Youngman fashion: “Take my house-please”. Why would the banks conduct a more thorough review when the party with the “alleged” claim is mailing in the keys? I may be wrong, and the Wall Street Journal article may be right; but in life, I’ve always found the simplest explanation is usually the best.
The following graph compares the number of homes with an active foreclosure notice on March 1, 2010 to homes with an active notice on June 1, 2011 by origination date. 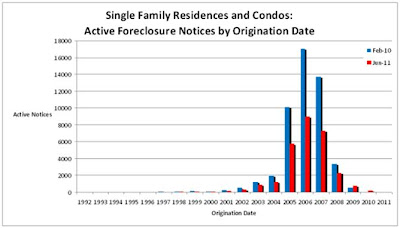 May’s Sales Activity
Case-Shiller, announced the dreaded double dip in home pricing in its May 31st report.  In response to the report, David Blizter, chairman of the S&P index committee reportedly said, “Home prices continue on their downward spiral with no relief in sight.” In response to Mr. Blizter’s statement the Maricopa County housing market immediately responded the next day by registering its 6th consecutive month with a resale median home price of $115,000 while quoting Mark Twain, “The reports of my death are greatly exaggerated.”
May’s Sales Summary

Final Thoughts
There has been a lot of speculation in a series of recent articles regarding the purchase of a home in Scottsdale by one Sarah Palin. Questions swirl, is she running for President? Is she making a run for John Kyl’s seat?  One article even questioned whether or not she has title issues.  In a recent Huffington Post article, Massachusetts Register of Deeds John O’Brien and Forensic Mortgage Fraud Examiner Marie McDonnell gave this opinion, “the title to Sarah Palin’s new home in Scottsdale is clouded by robo-signers.”  They even published a copyright protected "McDonnell's Mortgage Map"  exploring the property’s chain of title in depth.  Ms. McDonnell, what were you thinking? Not once in your report do you mention the “livery of seisen” ceremony. Did it take place or not?  What was symbolically passed? A token cactus? A clump of dirt?  Was the cactus of native variety? Was the soil clayish and high in alkaline content? Ms. McDonnell, these are the rudimentary tenets of common law, the Normans are not pleased. I drifted again, didn’t I?   The simple explanation is probably best. I’m certain Ms. Palin’s local attorney required title insurance, and I’m also certain our local title experts are confident in their $1,700,000 guarantee. In parting, the speculation as to why the home was purchased, I’m going with Scottsdale is a good investment opportunity and a great reprieve from Alaska’s frigid temperatures.
Cheers,
Tom Ruff
"McDonnell's Mortgage Map"
Huffington Post
"Robo-Signings"
Massive Backlog
Case-Shiller
The Information Market
Jay Brinkman
Posted by Greg Markov at 8:27 AM